While the environment gets more and more, farming, by definition, must get less and less.

We get a little irritated by people and organizations that always perpetuate the myth that California farming uses 80% of the water in the state. We have to continually remind them that the water we can't pump out of the Delta for farming goes out into the San Francisco Bay and eventually into the ocean. That's not water being used for farming. Water sent down the San Joaquin and other rivers for salmon restoration isn't water being used for farming. It's called environmental water use. Environmental water use is the highest water user in California. More than farming, more than anything, and it's growing as environmental rules and regulations keep demanding more and more. While the environment gets more and more, farming, by definition, must get less and less. What are the real numbers? These aren't numbers we are making up, or minipulating. They come from the State Department of Water Resources. They are the 'official' stats of the state. Farms use 40.8% The environment uses 50% For more information, continue reading the article below. And, any time you hear anyone using thee 80% figure, please correct them. It is used as a weapon against farming.

California Farm Water Coalition
Farms account for 40.8 percent of California’s water demand according to the California Water Plan (Bulletin 160-13), which was released to the public today. Farmers are often mischaracterized as using 80 percent of the state’s water supply, but that’s simply not true, based off of numbers published by the California Department of Water Resources (DWR).
The largest water user in California is the environment, using 50% of developed supply. The amount of water dedicated to environmental purposes is on the rise and continues to be the largest water user in the state. At the same time, water going to farms and to meet domestic needs has declined over the past decade. 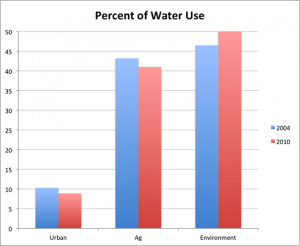